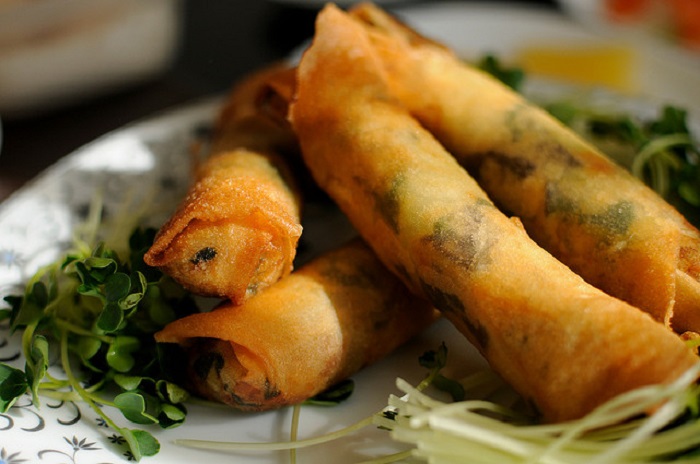 Spring rolls are a simple, delicious appetiser or hors d’oeuvre. In Cantonese cuisine, these appetisers are known as dim sum—food prepared in small, bite-sized pieces, usually served from steaming trolleys in baskets or on small plates.

How are spring rolls made? Take a sheet of thin, round dough (some flour, water and salt), wrap the fillings inside it, and deep fry it in oil until it turns crispy and golden. The fillings usually feature meat and vegetables such as chicken, duck, prawns, spring onions and carrots, but can vary from place to place.

The name ‘spring roll’ is a straightforward translation of the Chinese chūn juǎn. ‘Spring’ refers to the season, and the roll has its origins as a spring festival food. Starting some time before the Tang Dynasty (i.e earlier than 618 AD), thin pancakes known as ‘spring dish’ were made and sent to family members to welcome and bless the new season. The Spring Festival continues to this day in the guise of Chinese New Year.

As culinary skills developed, sometime during the Ming and Qing dynasties (from the fourteenth to the twentieth century), they evolved from flour pancakes to mignon rolls. These days, they exist in extraordinary variety not only across China, but around the world.

The ingredients of spring rolls tend to vary across regions and countries. In China, particularly in the north and east, and in Hong Kong, minced pork and cabbage are popular.

In Vietnamese cuisine, chả giò (minced pork sausage) or nem rán (fried roll) refers to a roll made of rice paper filled with ground meat and diced vegetables, whereas nem cuốn (rice paper roll) or gỏi cuốn (salad roll) contains prawns as well as vegetables, but is not fried. Like their Chinese counterparts, Vietnamese spring rolls are enormously popular abroad.

Taiwanese and Malaysian spring rolls also come in fried and non-fried versions. The non-fried spring rolls, known as popiah (or runbing in Mandarin), are much larger and are traditionally eaten during festivals. 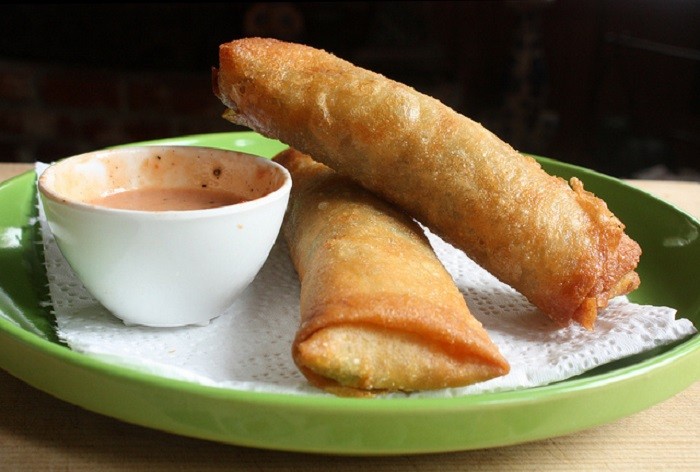 In Indonesia and the Philippines, pastries known as lumpia are encased in egg crêpes.

What varies most in all of these examples are the fillings, which can include different kinds of meat and vegetables including shrimp, chicken, carrots, spring onions, mushrooms, garlic and noodles. Different sauces, such as hoisin, soy or even Worcestershire sauce are often used.

A delicious snack around the world

Spring rolls are diverse not only in their ingredients, but also in the contexts in which they’re eaten. In many countries, such as China and Taiwan, they are a festive food, but will also appear in restaurants or as a popular snack food.

You may like: Interview with the British Retail Consortium

In places like the United Kingdom, where exported versions of Chinese and Vietnamese food are extremely popular, they are a staple of supermarkets, restaurants and takeaways alike.

The secret to their popularity is their simplicity, even for those who aren’t skilled at East Asian cuisine, it doesn’t take much to make a spring roll, but they never fail to be delicious, no matter where in the world you eat them.

To find out more about Cafe Asia’s range of Asian snack foods, get in touch. Why not follow us on Twitter too?