Garam masala – what, exactly, is it? 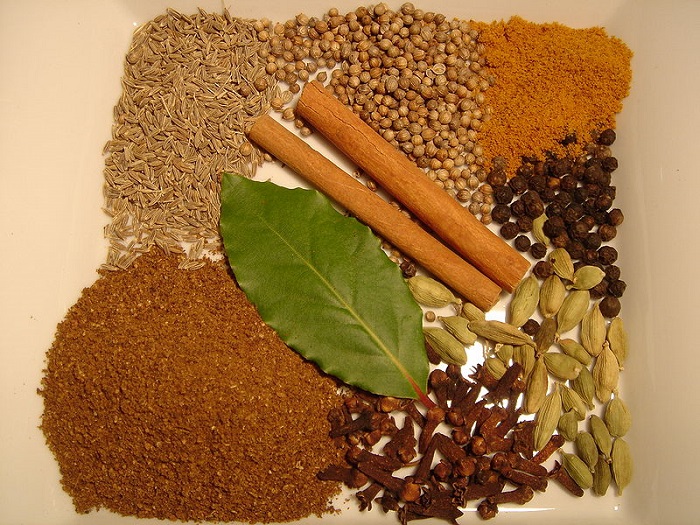 Garam masala seems to crop up in every Indian recipe under the sun, and in more than a few from elsewhere in southern Asia. Tandooris, biryanis and tikkas all use it, in Pakistan it’s added to pilau rice, and in Nepal it’s a final seasoning for soups and marinades. It’s one of the first things you’ll need in your Indian store cupboard and you can either buy it by the jar from almost any supermarket or make your own: but what on earth is it?

Denise D’silva Sankhe gets it right: it’s definitely not curry powder, which is a convenience product for the Western market, and it’s not really the generic stuff out of a jar either. The traditional Indian cook will have whole and ground spices to hand, and will bring layers of spice together, dish by dish. Somewhere between those poles is a happy medium – but where?

What’s in a name?

The name’s not too helpful. It means simply hot spice mixture in Hindi, although the ‘hot’ refers not to temperature but to the effect of the spices in Ayurvedic medicine, in which they ‘heat’ the body in order to rebalance the elemental substances of the body and thus achieve good health.

In truth, you could ask a hundred people about garam masala and have a hundred slightly different answers. The exact contents of the mix and the exact process of making it vary by country, by region, even by household: looking for the ‘real’ garam masala is a doomed endeavour. What you’re more likely to discover is a recipe that shares some, though by no means all, of its elements with the others.

Kris Dhillon, former restaurateur and author of The Curry Secret, presents his own straightforward method that’s as good a base as any. It’s mostly coriander and cumin, with a few cardamom pods, cloves and peppercorns, a brace each of cinnamon sticks and bay leaves, and half a small nutmeg, ground and blended into powder. Danilo Alfaro presents a few of the things you’ll find in variants: turmeric, saffron, fennel, ginger, garlic, mustard seeds, mace, star anise, tamarind, fenugreek or malabar leaves.

What is important, when making garam masala, is the ratios that you use: every chef and home cook will have their own preferred proportions of varying spices. While some claim that every component of garam masala should be of equal size, others disagree. That’s the beauty of garam masala, though – it’s an unofficial, semi-mathematical science.

To roast or not to roast?

Some cooks tailor the blend to the dish in hand, seasoning meats, vegetables or fish in a slightly different style. Others, like Petrina Verma Sarkar, roast the spices and add them in stages. It’s a little controversial. traditional recipes often work with raw ingredients for a fresher masala, but there’s a modern trend toward dry roasting to release the flavour and aroma of the spices. Just to complicate things further, author Anjum Anand reveals that there is a traditional reason to roast: in parts of India, ever-present damp can make the seeds soggy, thus difficult to grind and flavourless, and so a light roasting dries them out to the point where they’re worth using.

Go your own way

The bottom line here is that you’ll almost certainly end up inventing your own after a few goes around. Start with the basics and experiment; keep a record of what works with what and you’ll have complicated matters even further before you know it. It’s best made with fresh ingredients, like all of our products, but making up a batch will mean you’re never caught short. Of course, there’s more to a meal than a main course – stock up on our snacks and starters, and give yourself time to focus on the fun part.

To find out more about Cafe Asia’s range of quality frozen Indian snacks, check out our products page or find our freezers at one of Iceland’s Food Warehouses.