The weird and wonderful world of Japanese theme restaurants 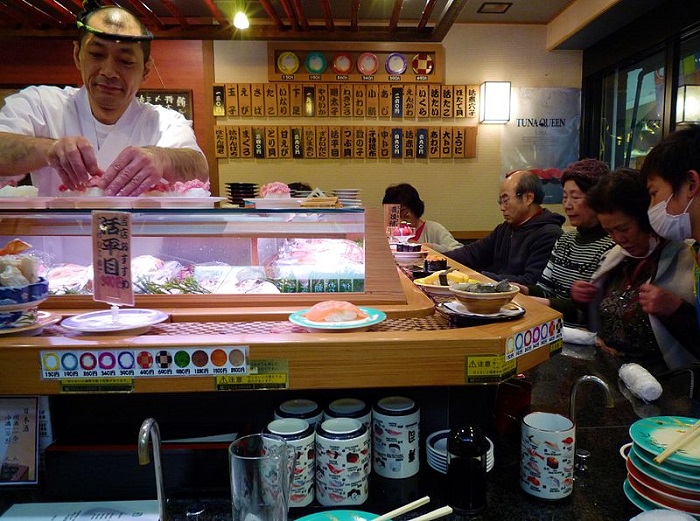 For those living in the West, the bright and colourful pictures of neon-clad Japan reflect a wonderful and sometimes strange image. When the subject of Japanese food is mentioned, many westerners would struggle to come up with more than “sushi” and “sake”. There is, of course, much more to Japanese food than that.

After the recession in the the 1990’s, the early 2000s began to see a pickup in the food sector in Japan, but perhaps not in the way you might expect. Real restaurant innovations began to show through and it was these that were drawing the biggest crowds.

Theme restaurants began to light the way for a new eating experience in Japan. Robots, cats, total automation, prison hospitals and ninjas all ruled the night. The innovation was simply that people wanted more than just food, they wanted an experience. Boy, do they get an experience.

Robots your thing? The “Robot Restaurant” in Shinjuku cost in excess of $10 million to build. Every surface is covered in brightly lit panels, screens and glass that would make a time traveller from the year 3000 feel old hat. Oh, and you get to watch giant robots fight while you eat.

Giving customers fresh produce is a positive restaurant trend the world over, and in Japan they’ve taken the innovation one step further. A Subway sandwich shop has begun to grow it’s own hydroponic lettuce in the middle of the store. Not only does this look great, it’s hyper local and sustainable.

While they only manage to top 5% of their subs at the moment, it’s a innovative concept. An equally fresh idea can be found at Zauo in Tokyo. Sitting on your table / boat hybrid, you catch your own fish from a pond beneath you and have them served to you moments later.

Live animals play a big part in many of the Japanese restaurant experiences. If you like your animals cold blooded, then the Yokohama subtropical teahouse will be sure to suit. If features an array of reptiles which, while mostly caged, you can view and enjoy for free. It’s not to everyone’s taste, but it certainly is different.

If you prefer a more fluffy eating experience, then maybe a cat restaurant is more up your alley. Sit and ponder the menu as at “Neko no Kanzume” cats wander between your legs and invite you to stroke and tickle them while your food is being prepared. Needless to say, keep a close eye on your Sashimi.

As you’d expect, there are also a few curve balls. An automated restaurant where you order from touch screen, the food turns up on conveyer belt and you deposit your empty plates down a chute. The ninja experience, where you are served by mercenaries from the era of feudal Japan in an authentic setting. Should you choose, you can even eat your meal locked in a prison hospital setting. Expect dishes that resemble intestines, test tubes and syringes.

Eating out in Japan contains more wonders than you can imagine. What drives these amazing creations is typically Japanese – innovation. As one of the most innovative nations on earth, it is little wonder that forward-thinking Japanese restaurateurs have found a way to get people through their doors and beat the tough economic conditions.

If all this has left you with a hankering for great tasting Asian food (albeit without the robots,) you’ll find our range in over 500 Iceland stores from November 2015.