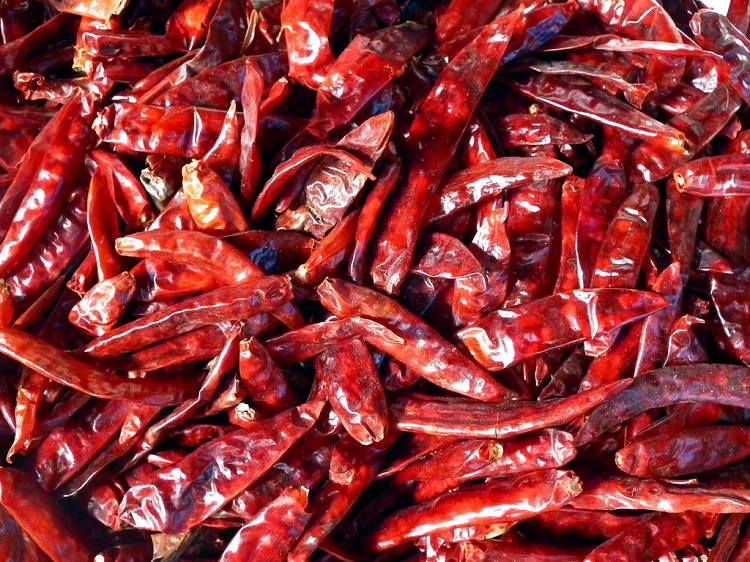 You’ve dabbled in jalapeños. You may have even cooked with cayenne. But what about the fruity fatalli or the ominous-sounding ghost pepper?

Deriving their hot taste from concentrated capsaicin – an irritant which can burn skin – chilli peppers are a staple flavour in most Asian dishes. Their pungency is measured by the Scoville scale, named after its founder, Wilbur Scoville. Paprika peppers achieve around 500 SHU (Scoville Heat Units); the world’s spiciest are around 4,400 times hotter. Here’s our pick of ten to try.

250 – 1000 SHU
Dried and ground down to spice, paprika peppers come in a wide variety of colours, sizes and flavours. Exceptionally mild, the peppers can also be used to add colour to egg and fish dishes.

1,000 – 20,000 SHU
Hot but not unbearable, the jalepeño is what most of us imagine when we think ‘chilli’. Its (relative) mildness makes for great versatility in the kitchen: you can stuff them, pickle them, fry them or drop them in your drink. And here’s a tip: the more scars on the skin of the pepper, the hotter it will taste.

10,000 – 23,000 SHU
Rare and often grown for novelty purposes, well-cultivated peter peppers have a fruity after-taste and are the basis of high-quality salsa dishes. For a more intense flavour, look for the red varieties.

30,000 – 50,000 SHU
Named after its home Mexican state, most of us will encounter Tabasco in sauce form – a simple mix of chillies, vinegar and salt which is easy to make at home. It’s a favourite with astronauts and soldiers, spicing up the blandest pre-prepared meals.

30,000 – 190,000 SHU
Use with caution: mild at first, the cayenne is deceptively fiery. A staple of Mexican and Korean dishes, cayenne fries well and is easily pickled. Try it in an omelette or as an alternative to black pepper,and if you don’t find a cayenne you like, keep looking. It’s one of the most diverse peppers in terms of colour, taste and intensity.

c. 175,000 SHU
Also known as the African bird’s eye chilli, piri piri is a staple Portuguese flavouring, and much more diverse and flavoursome than Nando’s would have you believe. Find out how to make your own sauce here.

c. 300,000 SHU
A high-ranking super chilli, a drop of fatalli is enough to make the most hardened spice fanatic sweat. Make it beyond the heat, however, and this African native reveals a fruity flavour that mixes well with citrus, pineapples and melons. Ideal for adding heat to sauces and vinegars.

c. 500,000 SHU
Like many of the hottest chillies, the Red Savina habanero is a cultivar of milder strains, discovered in a California field in 1989. For more than a decade, this was the hottest chilli known to man – with a taste well beyond the tolerance level of most.

c. 1,000,000 SHU
400 times hotter than Tabasco sauce, bhut jolokia is better known as ghost pepper, ranking number two in the world for heat intensity. Well paired with fish dishes, in India the ghost pepper is smeared on fence posts to ward off elephants. Let this be a lesson…

1,500,000 – 2,200,000 SHU
The world’s hottest chilli, a cultivar of the ghost pepper and the Red Savina. Up to 880 times hotter than the average jalapeño, the Carolina Reaper allegedly has a sweet taste. It’s also exceptionally ugly, and burns skin on contact. Watch these chaps take a taste so you don’t have to.

Tried any of the above or know one we’ve missed? Tell us on Twitter @cafeasiaupb. For less spicy – but no less interesting – insights to the world of flavour, check out our other blog posts.