Key food trends in German cooking, on the street and at home 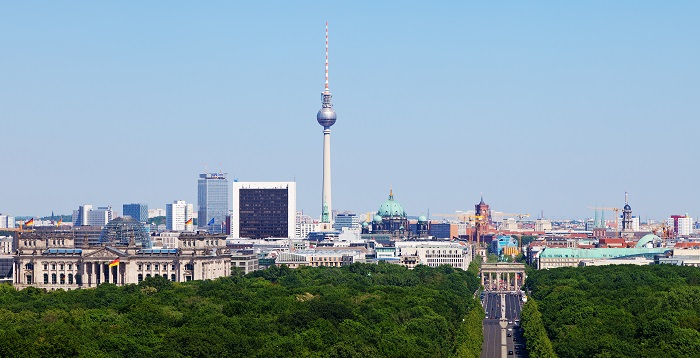 Germany has a long-standing street food culture. From currywurst to Christmas markets, vegan to Vietnamese, grabbing something quick and tasty on the go is incredibly easy in Deutschland. Considering Berlin’s reputation as the hipster capital of Europe, perhaps it’s fitting they’ve been doing street food since before it was cool.

For most people, German food inevitably means meat, but in reality, there’s much more variety than that. Admittedly, there are over 1200 different regional sausages, and it’s common to see “three steaks in a roll” at markets, but the breadth and diversity of food throughout Germany goes far beyond these staples, with vegetarian food becoming particularly mainstream.

Traditional German food is best summed up as cheap, cheerful and hearty, but it is by no means the only food on offer. Germany is a highly multicultural country, particularly in the Ruhr Valley area and Berlin, with large communities from Italy, Greece, Spain, Vietnam and Turkey.

This has led to a wide range of restaurants with some placing great provenance on the quality of ingredient and others to a lesser extent. Luckily social media is making it easier than ever for foodies to find the best grub a city has to offer.

You can’t walk far down a street in Germany without coming across an ‘imbiss’ (‘snack’) or ‘schnellimbiss’ (‘quick snack’) stop. An imbiss is a grilled bratwurst (a type of German sausage made from veal, pork or beef) or frikadelle (a burger sized meatball). They are usually handmade from a mixture of minced meat and breadcrumbs, served with a bread roll or fries and washed down with one of the countless local beers sold everywhere.

If you don’t happen to walk past an imbiss, then chances are you are not far from a doner stop. On the surface, it might resemble a UK kebab shop, but the product and preparation are quite different. A German doner doesn’t come in a pita or flatbread but usually a soft Turkish bread more like a bap. They always come with tzatziki, the creamy, garlicky mint and yoghurt sauce.

With so much competition prices are low, typically €2-3 (roughly £1.50 to £2.50) per sandwich or snack. These low prices can sometimes lead to cutting corners with quality taking a hit. Word-of-mouth and the multitude of food blogs can make it easier to find the best establishments, which use top notch ingredients and fresh herbs and spices.

Food trucks are taking off in big ways. The scene is a little behind the US and UK with tighter restrictions in terms of where you can prepare food and sell it. However, Germans love solving problems. Growth of street food markets – particularly across the capital, Berlin – has enabled a new generation of people to get their food to the masses with fewer overheads than a traditional restaurant. 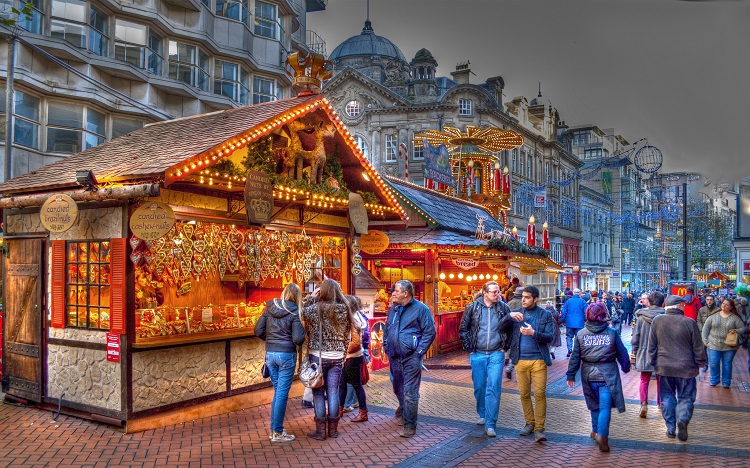 These are quality focussed, with customers willing to pay more for better flavour and ingredients. There is a heavy American influence, with the likes of pulled pork, 100% beef burgers and slow-cooked ribs being popular. Alongside this everything from Korean steamed baps and Spanish inspired stews, to gourmet toasted sandwiches and artisan ice lollies on offer to the famished masses.

Germans love being green with their waste. Many street food vendors sell their food in disposable boxes. Soups to go are sold in small buckets, with a deposit paid so customers can keep the bucket if needed, or bring it back and collect the money. First rate fruits and vegetables are combined with delicious dressings for usually around €5 (£4).

Germany is incredibly vegan and vegetarian friendly, so much so that Berlin was voted Vegetarian Capital of the World by Saveur Magazine. “Berlin is the first major Western city where vegetarianism has achieved complete culinary parity with the traditional carnivore’s diet,”, they say; “the city’s new vegetarian cooking is intersecting with the growth of an increasingly popular locavore food scene to create a unique, and often brilliant, meat-free Mittel European-accented cuisine.” 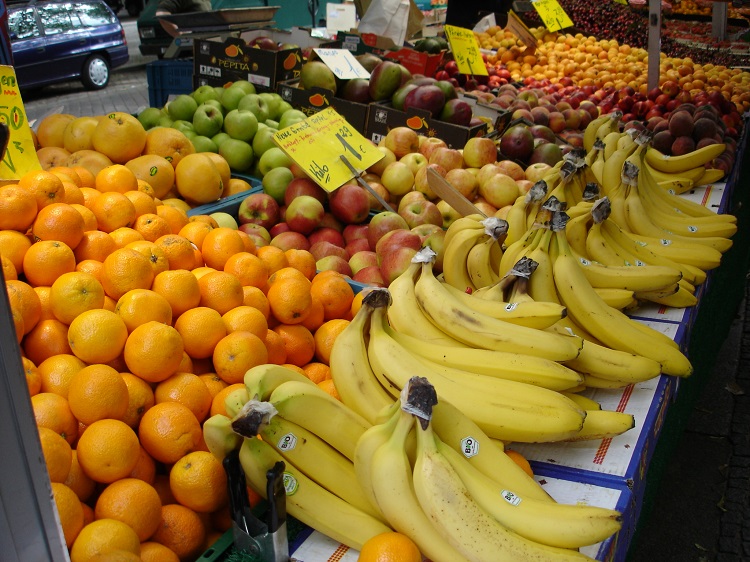 The quality and taste of the vegetarian dishes available are enough to tempt even the most committed carnivore. Some of the best food in Germany is without meat, with traditional, seasonal, high-quality classics ranging from Kartoffelpuffer (potato fritters) to Soleier (pickled eggs) to Spargelcremesuppe (cream of asparagus soup).

Berlin is perhaps atypical when it comes to the dietary habits of Germany as a whole, but where it leads, others follow. As with the street food revolution, Asian cuisine is spreading like wildfire in the capital, largely due to the well travelled and multi-cultural populous.

“People are becoming aware that most food served at Asian restaurants here is not necessarily representative of the best that Asian cuisine can offer,” says Shanghai-born chef Ash Lee, founder of the Chi Fan supper club. “The street food scene that seems to have exploded here recently has helped generate some genuine interest in Asian food, and now people are looking harder. That can only be a good thing!”

Berlin may not have been known for good Chinese, Japanese, or Thai food in the past, but today’s young, internationalist citizens have a hunger for mapo tofu, for sour plum-stuffed onigiri, for fiery papaya salad, and more.

Seasonal food is a big deal in Germany, with “Spargelsaison” (usually-white asparagus season) signifying the beginning of spring, through to “Pfifferlingzeit”, locally picked Chanterelle mushrooms, at the end of summer. Let’s not forget the renowned Oktoberfest; a harvest festival with added beer and leather trousers.

After Oktoberfest, there’s a short pause before the country opens its Christmas markets. These are held in virtually every town and city, and while most people go to sample the Glühwein (mulled wine) and Grog (rum with hot water), it’s never good to drink on an empty stomach. So you’ll find Kartoffelpuffer mit Apfelmuss (which are something like a rosti or hash brown smeared with apple sauce), more sausages than you can shake a stick at, and Flammkuchen – a kind of baked flatbread, often with a cheese, sour cream and optional bacon topping.

Chestnuts and pretzels are common if you just want a snack, but if you fancy something a bit heartier, an outstanding range of soups and stews will keep you going on a cold winter’s night. Two particular favourites are Grunkohl, which is a stew made with kale, potatoes and chopped Mettwurst , and Erbsensuppe – made using dried peas, potatoes and yet more sausage. If you want it without meat, pumpkin or lentil works too.

Traditional German home cooking varies from region to region. The south shares many specialities with Austria and Switzerland – for example, Schlachtschüssel. The south-west is greatly influenced by French cooking, seen in dishes like Rouladen. In the eastern region, Eastern European flavours reign, seen in dishes like Beetenbartsch. Other dishes are shared by all states but prepared differently. Sauerkraut, for example, has a unique recipe in each region.

The hearty nature and strong emphasis on meat and potatoes can be explained by Germany’s northern location. During the cold winter periods, Germans had to consume higher calorie, nutritious foods to sustain their health. Resulting dishes included hearty potato creations (Germany belongs to the top potato consuming countries), as well as Sauerkraut, which provides a good amount of Vitamin C.

Clean eating is a key trend in Germany, with consumers moving away from the industrial food system that produces highly processed goods. There is a more critical interest in origin, with natural and simple products growing in demand. There is also a demand for “clean-labeled” goods and less processed products with over a third (35%) of German consumers stating they would avoid foods with artificial sweeteners.

This is part of an overall lifestyle trend. Only 15% of Germans are lactose-intolerant, and 4% gluten-intolerant, but demand for products that cater to this market stretches far beyond this. Brands are using “free from” claims as an additional health message that is resonating on shelf.

Germany is Europe’s largest market for organic food and drink products, and there has been a big rise in ethically-driven brands. Between 2004 and 2013, the share of organic products in total food and drink launches in Germany grew from 1% to 18%.

There is more and more demand for greater food transparency and more visible food footprints. The main source of this demand comes from the younger consumers, with 54% of 16-24-year-olds prepared to change their lifestyle to be healthier.

Among German consumers, there is considerable interest in food products of regional origin. Besides emotional ties to home regions, consumers increasingly associate regional products with freshness, high quality and support for the local economy.

As consumers increasingly look to fit in meals around their hectic lifestyles, snacking innovation is focusing on convenient and portable offerings across categories. Consumers desire convenience at home as well as on the go, as they are also busy in their domestic lives and do not necessarily want to cook or prepare a snack.

From sandwiches to salad to sushi, pretty much anything is being snackified today, with portable and mini-sized snack versions of nutrient-rich, healthy meals gaining importance, particularly those responding to the needs of the growing community of vegetarians and vegans.

There’s more to German cuisine than sauerkraut, spuds and beer steins. Berlin, in particular, is a foodie paradise, with low overheads and plenty of interesting spaces to set up new street food, but this trend can be seen in other bustling cities like Munich, Frankfurt, Stuttgart and Hamburg. The rise of street food, combined with a very open world view and palate when it comes to tasting new trends, means Germany is worth a visit for the food alone.

Find out what’s cool in Scandinavia and what’s hot in Spain by following our blog. Cafe Asia’s frozen snacks are made with fresh ingredients, spices and herbs, harnessing the beautiful flavour of traditional Asian cuisine. For more information, get in touch today. And say hello to us on Twitter too.