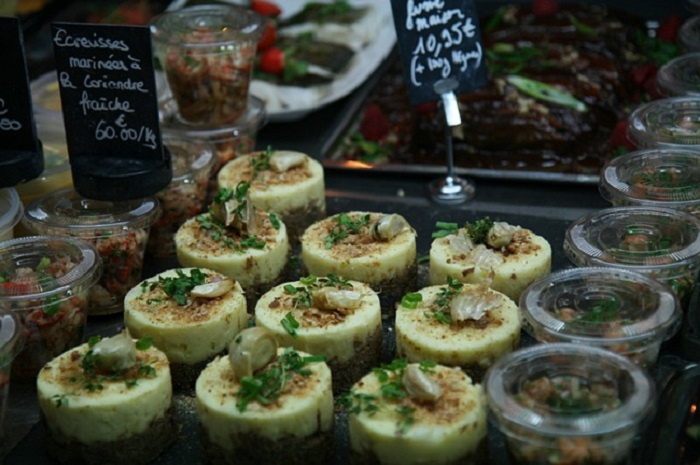 Yet Britain is seeing a decline in the traditional French restaurant: a decline mirrored in Parisian food trends and in the rest of France itself. Back in 2013, reports showed that a massive 54% of restaurant sales in France were accounted for by fast food chains, spelling bad news for traditional cuisine. French fine dining appears to be in freefall, with alternative food trends playing a far greater role in French food culture.

Here’s what you need to know.

The rise of street food

Street food had a pretty slow start in France but is now starting to make waves in large cities beyond Paris. Driven by the success of street food movements in the US, the UK and other countries around the world, the scene is perfect for those looking for an affordable, casual bite to eat on les boulevards.

It’s also partly thanks to Le Fooding that street food now has a place on Gallic pavements. This restaurant guide, founded in 2000, aims to liberate the French from the haughtiness of its traditional cuisine, embracing more contemporary food trends and more “unstuffy” venues.

Le Camion qui Fume (“the smoking truck”) was the first Parisian street food vendor: an American-style burger truck aiming to serve dishes comprising great ingredients on a tight budget. Since its arrival, other notable vendors have sprung up. Adding competition to the burger scene is Le Camion Gourmand (“the gourmet truck”); ice cream lovers are catered for by Glaces Glazed and cities including Lyon have caught the bug with more global offerings such as Lebanese mezzes and more from Akle.

In Aix en Provence, you’ll now also find Food-Truck-Station: a permanent “village” of street food trucks, with different vendors operating each day. In Paris, you’ll find the StrEAT Market which launched in 2016, featuring a range of food trucks every Friday. The French street food scene has flourished so much in recent years that the country even hosts the Street Food International Festival too.

As well as street food, more “conventional” fast food is also on the rise.

Head to any McDonalds in France and you’ll find dishes such as “Le Croque McDo” (their take on a Croque Monsieur) and goats’ cheese wraps. Five Guys will be firmly entrenched in the French capital from summer 2016, while there are other American chains – Shake Shack, In N Out Burger and Umami Burger – that the French are calling for too.

However, it’s not all about the big US chains: there are several French fast food brands that are gaining in popularity due to their authentic French menus at casual dining prices. One is Grill Courtepaille, serving steaks and burgers alongside pâtés, cheeses, iced nougat and more. Cojean is a chain that also supports the French fast food trend, focusing on soups, quiches, sandwiches and drinks in numerous locations across Paris.

The food scandals that hit the headlines over the last few years aren’t just confined to the UK – France has had its fair share (including “horsegate”, and the “fake cheese” scandal surrounding supermarket ready meals) too. As a result, and partially due to the global economic downturn, much of the country has turned to locally grown products where full traceability is possible, the impact on the environment is lower and costs are often not as high as foreign exports.

This newfound appetite for eating local and reducing food waste was reflected in a campaign from French supermarket chain Intermarché, who dedicated a whole aisle to ugly and misshapen fruit and vegetables. The campaign was a success, with these fruits and vegetables selling out. In 2016, a law was passed that means that French supermarkets now have to donate unsold food to food banks and charities.

More and more, local producers are selling directly to mass-market retailers in their area, and local farmers are selling directly to consumers at markets or bricks and mortar stores. According to the 2016 SIAL Food 360 report, 62% of French consumers prefer to buy local produce, with companies such as TousPrimeurs and Amap founded to deliver locally produced fruit and vegetables directly to consumers’ doors. The same survey shows that one in two French consumers grows their own fruit, vegetables or herbs – truly local produce. This trend could well prove to be a stumbling block for overseas businesses looking to tap into the French market, unless they can appeal to one of the country’s other food trends.

If you speak French, this video gives a great introduction to what Amap is all about:

While local, seasonal produce is important to much of the French population, that’s not to say they’re not interested in something new. In a 2016 survey of 14 different nationalities, SIAL reports that the French are the second most curious when it comes to a desire to try new products.

Foreign flavours are firmly on the menu too. In addition to the growth in street food options from across the globe, we’re seeing more traditional restaurants starting to adopt ingredients and techniques driven by the ongoing influx of immigrants.

At least 20% of the country’s capital is made up of those who have immigrated from another country, and while such people – in particular, those with refugee status – are generally seen in a negative light, they bring plenty of positivity to French tables.

In 2016, Paris played host to the first-ever Refugee Food Festival, where nine different chefs from a group named Les Cuistots Migrateurs (The Migratory Chefs) took over the stoves at nine Parisian restaurants to showcase the cuisines of their home countries, including Syria, Sri Lanka, Ethiopia and others.

Such diversity isn’t just restricted to festivals, however – it’s spreading to the capital’s Michelin starred restaurants too. You’ll find harissa on the menu at L’Arpège, miso and black sesame at La Table du Lancaster, and everything from caviar to Japanese long pepper at Maison Rostang. At every level of French cuisine, new flavours and cooking methods are coming to the fore.

What about Asian food…?

The link between France and Indo-China continues to be a strong one, thanks to the former French colonies of Vietnam, Cambodia and Laos having had a huge impact on French food and vice versa, and also due to the strategic partnership formed between the two regions in 2013. French influence on the area began back in 1615 when Jesuit missionaries arrived from the country, and a nod to Gallic cuisine can still be seen in Indo-Chinese menus today.

On the streets of Ho Chi Minh City and Hanoi, you’ll find baguettes and coffee being served on the streets for breakfast, while Bánh Mi sandwiches utilise the idea of French baguettes (although generally created with rice flour to make them lighter), packed full of grilled meat and plenty of Asian herbs with vegetables.

The influence actually worked both ways, with France now home to hundreds of thousands of people from the country’s former colonies, and a variety of restaurants serving authentic dishes from this area. The 13th arrondissement in Paris is home to a number of Vietnamese eateries, thanks to its history as a settling point for refugees from the Vietnam War in the 1970s and 1980s.

Indian food, at present, is nowhere near as big in France as it is in the UK: that rich history of trade with India that we have here just isn’t present on Gallic shores. However, French and Indian cuisines have plenty in common. Both countries have a love of good food, use plenty of butter, and their dishes are known for big, powerful flavours.

Travellers to Paris may well discover the city’s Quartier Indien (Indian Quarter) not far from the Gare du Nord: home not only to great, authentic Indian food such as vegetarian South Indian food from Krishna Bhavan (most Indian food in France is modified to suit Gallic tastes), but also saris, Bollywood imports and more. However, such an area is rare for the country, with Indian food still yet to take off.

While traditional French cuisine continues to decline, there are plenty of new food trends in France springing up and vying to take its place. From street food in Paris and beyond to the growing popularity of fast food, it’s clear that France’s traditional food culture is metamorphosing into something much more exciting. As French food expert Julia Child once said, “In France, cooking is a serious art form and a national sport.” The statement remains as true as ever – but it’s a sport that’s continually adopting new rules.